Chaharshanbe Suri also written as Chahar Shanbeh Soori or Charshanbe Soori is one of the world’s ancient cultural events. Festival of Fire and Fire Jumping Festival are a few of the names used to refer to it. Iranians, Azerbaijanis, Afghans, Tajiks and Turks (Azeris living in Turkey) celebrate this day by lighting fire. They jump over the fire while chanting special phrases. Actually, this is one of the main customs of this festival.

When is Chaharshanbe Suri celebrated?

This occasion is celebrated every year on the last Wednesday of the year. It is a chance to mark the end of the year and to hope for a bright New Year.

What does Suri mean?

Suri meaning, celebration is added to the word Chaharshanbe which is Persian/Farsi for Wednesday. This is exactly why Persians call this festival Chaharshanbe Suri.

A lot has been said and written as to the roots and significance of Chaharshanbe Suri. Some say the fire is symbolically meant to burn the evil and bring about good for the New Year. Religiously speaking, ancient Iranians were followers of Zoroaster. In Zoroastrianism, fire is one of the four sacred elements of nature. It is also the most purifying element as it never gets polluted.

Trick or Treat on Chaharshanbe Suri?

On this night, there used to be a tradition called “Ghashogh Zani”. Ghashogh Zani has the same meaning as spoon banging where people would go door to door in disguise. Then, they would bang spoons on plates to ask for treats. Somehow like the famous Halloween trick or treat ritual. Today, this tradition is almost forgotten and not practiced.

Nowadays Chaharshanbe Suri has become more of a firework festival. Crowds of people sing and dance until the midnight under the lightened streets and squares of Iran to celebrate.

As mentioned before, this occasion falls on the last Wednesday of the Persian New Year. So that, it is one of the closest occasions to the most important event in the Iranian calendar, Nowruz. That is why, people usually tend to have more free time as many schools and offices are closed. Also, they are excited about the Iranian New Year. besides, they would like to enjoy the heavenly spring weather especially in the central and southern states of Iran. Clearly, people get too busy with their New Year’s preparation and family visits. These, all together, make Chaharshanbe Suri one of the best occasions to visit the country. 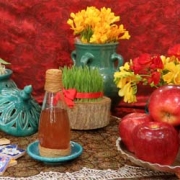 Next year in Iran:
Why and how we celebrate NOWRUZ
0 replies