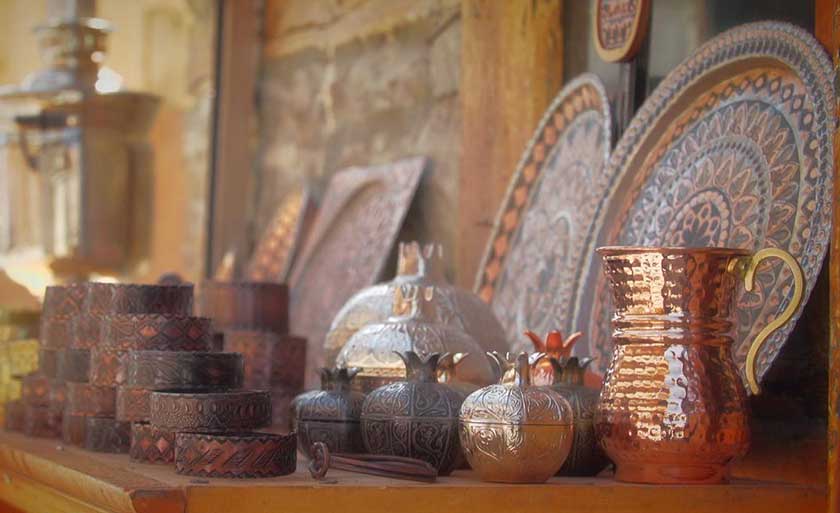 The art of making copper wares through hammering copper bar and sheet is called coppersmithery. The initiation of coppersmithery coincided with the first human discoveries in the field of iron and copper and his achievement of its treatment methods. Lack of evidence for the existence of metal melting furnace in the prehistoric period indicates that for making the first copper tools, human made desired shapes out of natural copper by hammering. Based on obtained samples and in the early fourth millennium B.C, copper was used widely and was hammered for making arrow, awl, pin, etc. Existence of copper mines in Kerman and Anarak of Esfahan since ancient times has caused prevalence of coppersmithery in these cities from past to the present time.

The main products of coppersmithery are dishes with different shapes and sizes. The coppersmith hammers one piece of copper for making small containers and they are often concave.

For this purpose, first he opens (planish) copper by hammering and twisting it after each time of planishing. He makes big objects from round sheets by the same way and this work also needs great skill. Sometimes dishes with different size and forms are made from two parts. First, coppersmith bends the plate and forms it in the shape of cylinder. Then, he takes a round plate, brings its edge upward by hammering and deepens it slowly. This is done by a four-side hummer. Their joint is a kind of bell and spigot joint and the action is traditionally called “Hamkardan”. After hammering and creating primary shape of the dish, craftsmen smooth the surface of the work with a hammer without handle which is in fact a flat tempered steel piece and known as frame of stem to remove the impacts of hammering as much as possible. A coppersmith whether works on a copper sheet or prepares copper from melting, always begins his work with thick sheets and ends with a final product that is thinner than consumed copper. The common dishes of coppersmithery are pots, small pots, pot lids and also big strainer, flagons and different trays. Those products which are basically consumable are tinned and become white in a way that copper body becomes hot by fire then is covered with a layer of tin. Whitesmith is not necessarily a coppersmith and has only the experience in whitesmithery.