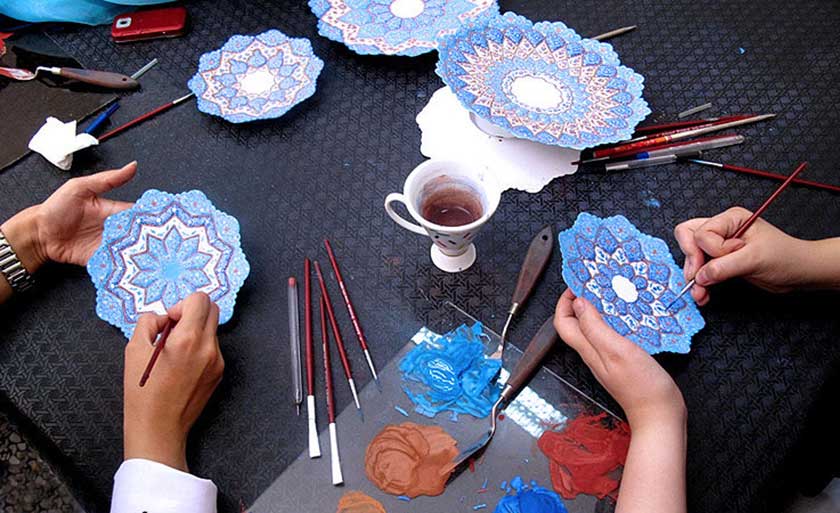 Enameling is an art based on painting and decoration of the surface of metal bodies and sometimes ceramic objects covered by a coat called enamel. In fact, enamel is a clear glazing and glass obtained from merging glass glaze and metal oxides. Having baked in kiln, it becomes hard like glass. Enameling is done on the copper and brass bodies. Of course, in order to make jewelry and decorative objects in addition to copper, gold and silver are used too. As for the history of making enamel works no precise idea may be expressed, the first works of enameling which have been ever found so far are six golden rings which date back to 1300 B.C in Cyprus. They are the only genuine gemmed enameling works. In Iran, some of the researchers believe that it dates back to 1500 B.C. According to Pope, the famous historian, enameling gemmed objects are of the Iranian innovation and its wonderful sample is Khosro’s Cup related to the Sassanid period. The climax of the enamel art has been in Seljuk period, then during the Safavid period in Esfahan, this art is mixed with paintings of the court feast and the hunting games displaying a new manifestation.

Enamel-workers present their works in two styles: painting and squaring, but whatever is done in Esfahan is in painting style. In order to prepare enamel works several stages should be done: First, the object which is to be enameled is made of copper in any desired shape and size by copper-worker; Second, its surface is coated by a kind of white glaze (Kaolin) after 3-4 times heating in a kiln with 700 degrees centigrade for a certain time. Now it is prepared for painting. After suitable coloration compatible with the used colors, the temperature of the kiln is adjusted so that while color stick to the body of the enamel it prevents burning. Enamel-workers use gold oxide, copper oxide and fine cohesive mud (gel mashi) to prepare red, green and blue and yellow colors respectively. One of the important factors determining the quality degree of a piece of enamel work is non-scratch ability of its body surface after finishing the baking stages in the kiln which must be carefully considered.