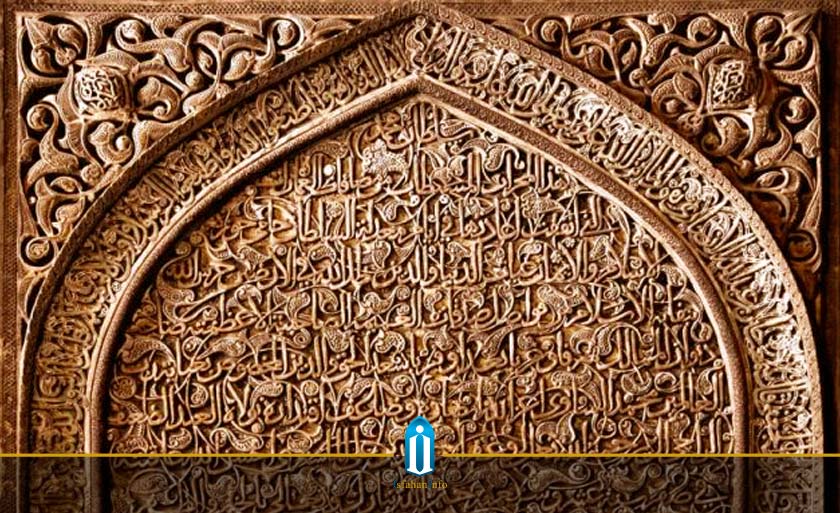 Stucco is considered as one of the unique artistic phenomena in traditional Iranian architecture and because of its appeal and flexibility in strengthening the structure of constructs and decoration, it has a special application. During the Elamite, Achaemenes and especially Parthian and Sasanid era, Chalk has been considered as a sturdy material to be used in construction. The art of stucco expanded during the Islamic era and Its trails can be seen in mosques, schools, palaces and other structures as it was paid attention to as a decorative element and its precise details grew more.

One of the best primary examples of Iranian stucco can be found in Jameh Mosque of Nain which is detailed and decorated by geometric shapes, plants and beautiful inscriptions. Arabesque patterns, vegetative patterns, geometric designs and Kufic inscription were the major designs of this era. The stucco patterns made during the Ikhanate era were far more detailed, complex and useful than before. Jameh Mosque of Isfahan’s Altar which belongs to the king Oljeitu era, is the representative of greatest brand of stucco in Iran’s Islamic architecture.

The art of stucco had a special manifestation the same as Tiling during Safavid era. One of the most valuable sights of that era is Ali Qapu palace in the western side of the Naqsh-e Jahan Square located in Isfahan. After the Safavid era the art of stucco continued and right now it is used in public and privet structures. Chalk is one of the first glue like building material that was extracted by the human kind and after changing its form, it was used in building construction works as mortar, cover and stucco. One of the properties of chalk mortar is that it hardens quickly. In other words, chalk powder starts to harder after being mixed with water. Iranian builders and architects whom have been completely aware of the properties of chalk since old times, to prevent its quick hardening, they usually stir the mix for some time until it becomes something which they call Gache Koshte. This chalk (Gache Koshte) does not harden quickly and therefore one of the major uses or this type of chalk mortar is making Stucco.

Regardless of the historical era or the different decoration styles, two methods can be considered as the main methods of doing Chalk made decorations one of which is that after applying the chalk mortar on the surfaces of the structure like the wall, ceiling and pillars and after the necessary time for the chalk to strengthen has passed, the artist will start to shape the chalk. The majority of stucco decorations which are the ornamentations of Islamic architecture era in Iran, have been through this method The other method involves the use of a mold where the chalk grout is poured into a single piece or multi-piece mold to form it and after the necessary time for the chalk to strengthen itself has passed, they are removed from the mold and placed on the intended structure. The stuccos used in the architectural arrangement of Islamic era has been executed in different methods such as Kop Bori, Tong Bori, Koshte Bori and so on.