Naqsh-e Jahan Square or as the Iranians would call it, the pattern of the world, shows the splendor of the fifth safavid king, Shah Abbas the great. Shah Abbas 1 and his head architect Ali Akbar Esfahani changed the city structure and expanded the city to the river. Another one of these expansions was designing and building the Naqsh-e Jahan Square (Imam Square) as a symbolic square (the pattern of the world) with representatives of the four main pillars of power.

On the southern side of the square stands the great portal of the Jameh Abbasi Mosque (Imam Mosque) that represents the people and the popular. 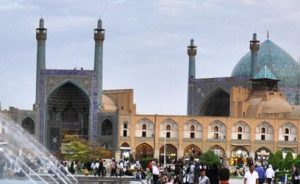 There is The Sheikh Lotfallah Mosque as the religious pole of the square on the eastern side. 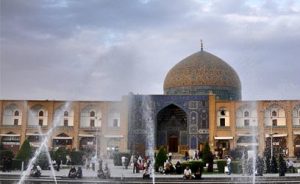 Ali Qapu Palace is a representation  of the government. 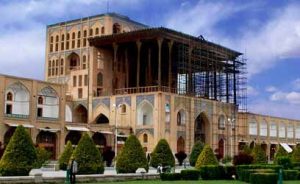 Qeysarie Bazaar is the economical pole on the north side of the Naqsh-e Jahan Square. 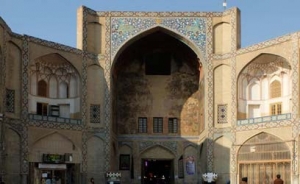 What is the greatest square in the world?

Naqsh-e Jahan Square among all the great squares in the world; place des Vosges, the French architecture masterpiece, La piazza San Marco in Venice, the Plaza Mayor de Salamanca in Spain, and … has a different characteristic and a unique “language” of architecture.

The purpose of this Safavid Art

Throughout the history, the square has been used for performing all kinds of festivals, parades, and ceremonies such as; national, governmental and popular ceremonies. Also this is a square just about perfect for a game of polo. The stone goal posts still exist in north and south ends of Naqsh-e Jahan Square.

Polo and horse riding are two of the ancient Persian sports mixed together, played not only for leisure, but also as a display of bravery of men in wars. The royal household would watch the games from the balcony of Ali -Qapu Palace. Apart from this, some executions took place in Naqsh-e Jahan Square.

For the present, Naqsh-e Jahan Square or Imam Square is still used for performing ceremonies and parades on special occasions. There are Traditional shops all around the square for you to explore. Also, Carriage rides are a wonderful way to experience the beauty of the Naqsh-e Jahan Square.

The historic center of Isfahan: on the UNESCO World Heritage List

UNESCO has recognized Meidan Emam as a world heritage site of culture in 1979. As you Walk among this square, it somehow makes you feel as if you are walking through the mystic past.