In the southern Iwan (a veranda) of the seminary, There are some epigraphs which one of them is in black Thuluth calligraphy (a kind of Islamic calligraphies) on a yellow background which has been written by the famous calligrapher named Mohammad Reza Imami and its script is Salavat (blessings of God) upon fourteen infallible persons and dated 1077 AH. Around the Mihrab (a place in the mosque that indicates the direction of Mecca) of this veranda, there are some verses of the Holy Quran with the same date and the signature of the above-mentioned calligrapher.

The design of the tiles around the yard of the madrasah has been decorated with blue color and the names: Mohammad (the Prophet of Islam) and Ali (the first Shia leader) which have been written in Bannai Kufic ( a kind of Islamic calligraphy). The term (Infallible figures) is a title chosen by Shiite Muslims to call their grand fourteen personalities including the Prophet Mohammad, Lady Fatimah al-Zahra (Prophet’s daughter) and the twelve divine leaders. In some traditions, the Shia believe fourteen infallible persons to be the very household of the Prophet Mohammad.

There is an epigraph inside the Mihrab written in white Thuluth calligraphy on a tile with a bluish background during the reign of Shah Suleiman Safavi. This epigraph consists of some sayings of the Prophet Mohammad (p.b.u.h.) dated 1905 AH and the autograph of Mohammad Hassan Imami. Since the seminary was repaired during the reign of Naser al-Din Shah Qajar, it is called Naseriyeh. The madrasah Naseriyeh has eight rooms located in the southeast angle of the seminary.

The rooms used to be dormitories or classrooms in winter. It has two verandas located in the northeast and the southwest angle. The embellishments used in the madrasah are tiling, Muqarnas ( a type of decoration composed of series of niches embedded within an architectural frame), carving and inscription.

In different eras, there were some prominent scholars who used to study and teach in this madrasah. 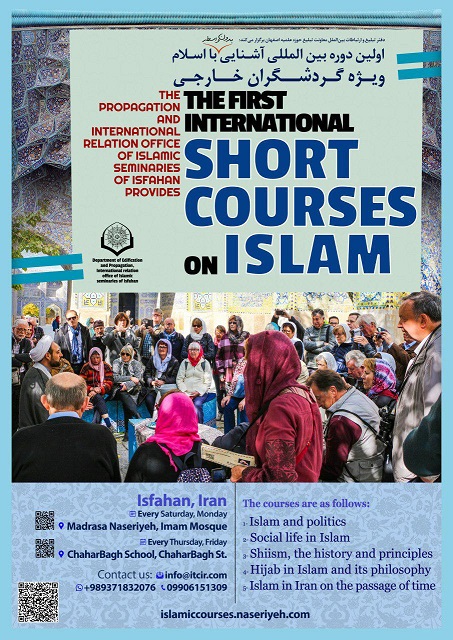 You can ask Madrasa Naseriyeh to set any type of technical meeting or any other information related to Islam and Iranian religious via: