Organize your trip to include these must see places in Isfahan. 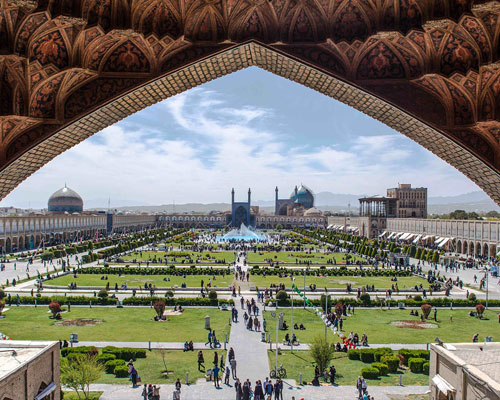 Naqsh-e Jahan Square known as an important historical site was an arena of government (Ali Qapu Palace), Economy (Qeysarie Bazaar), Religion (Sheikh Lotfollah Mosque) and People (Shah Mosque). They were placed in four corners of The Square as the four main pillars of Safavid reign.

Also, Naqsh-e Jahan Square used to be a polo field. The stone goal posts still exist in Naqsh-e Jahan Square. Polo and horse riding are two of the ancient Persian sports mixed together, played not only for leisure, but also as a display of bravery of men in wars. 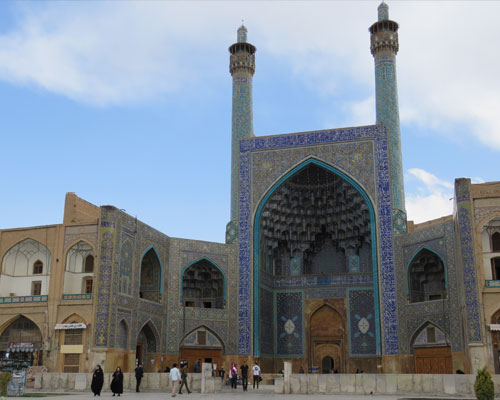 Shah Mosque takes the second place on this list. This mosque is located on the south side of Naqsh-e Jahan Square. Shah Mosque has a worldwide reputation for having the tallest double shell dome with 52 meters’ height. Once inside, if you stand on the black piece of stone on the floor, you can hear the echo of your voice. Tablets (written words on a stone) of Qajarid and safavid kings can be seen in different parts of this mosque.

Aside from all of the features of this great mosque, there are some beautiful magnificent tile works. You can visit the workshops and see the process up-close.

There are two theological schools on the sides of the mosque which are referred to as Naseriyeh (winter school) and Suleimanieh (summer school) schools. Nowadays, there are still courses taught in Madrasa Naseriyeh which you can also take part in as a unique experience. 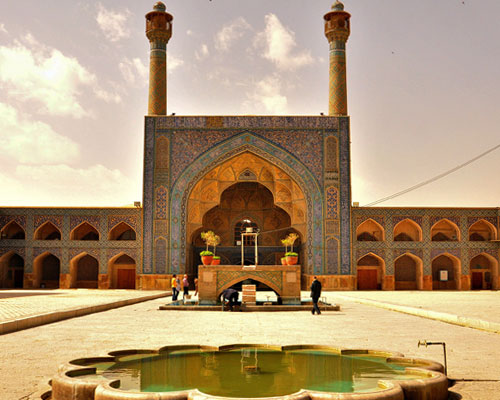 Jameh Mosque, known as the dream tunnel, reviles 14 centuries of Iranian architecture achievement. jameh Mosque was inscribed on the world heritage list in 2012. Of its beauties Nizam al-Mulk dome, Taj al-Mulk dome are among the most impressive brick dome constructions.

In Jameh Mosque, The Oliyatou Mihrab (the altar of Master Hydar) has a special plaster artwork which completes the brickwork. After the Oliyatou prayer hall, a low-rise door leads you to one of the most magnificent Shabestans (winter prayer hall) which is famous for the sight of lights coming through a marble roof. 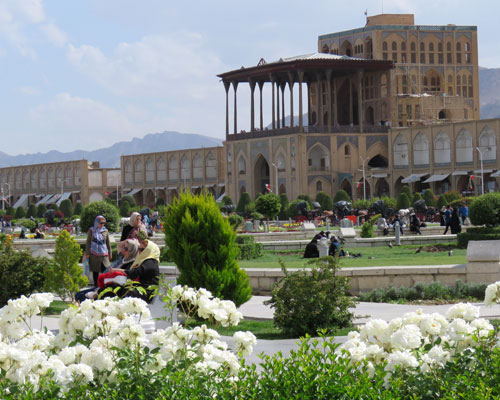 Ali Qapu can be considered as one of the main royal palaces of safavid era. The balcony has 18 wooden columns each made from the trunk of a single plane tree. Have you ever been in a place out of time, where the elements seem laid there, as they were dozens of years ago? watching Naqsh-e Jahan Square from the palace balcony is a lifetime experience that will take you to the old Isfahan.

the acoustic hall of music on the 6th floor has been built with delicacy and precision which is reflected in the Persian art of Gach Bori (plasterwork). 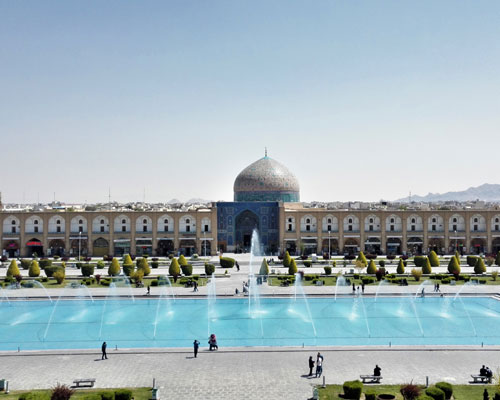 Sheikh Lotfollah Mosque is another precious safavid gem among this list. Except from all the other mosques, there are no minarets and there is no courtyard in this one. Prof. Arthur Upham, an American historian of Persian art, and highly respected in Iran, said of this mosque, ”One can hardly believe that this work is the product of the human being”. Looking upward the first expression of the dome is that of a peacock displaying its tail. The mosque’s architect name is inscribed in calligraphy on tile mosaics inside the Mihrab. Shabestan (winter prayer hall) is placed under the main dome structure. a picture of a vast blue ocean is drawn before your eyes as you enter the Shabestan. 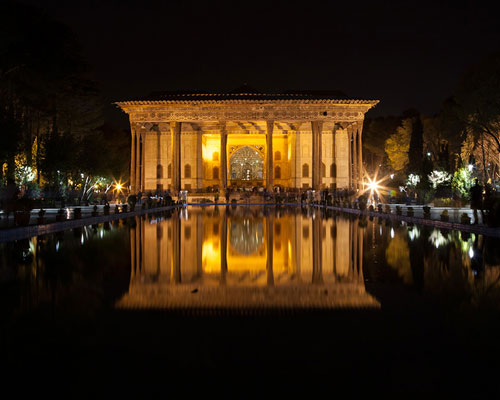 The seamless classic Persian garden surrounding this palace was inscribed on the world heritage list in 2011. Chehel Sotun Palace consists of the columned Hall, the Mirror Hall and the Throne Hall. Each section of this palace has been allocated a specific decoration.  The interior of the palace is decorated with mirror works and the halls are rich with fresco paintings that belong to the safavid era. Immediately behind the Mirror Hall is the glorious reception Hall. the six large paintings on the walls depict specific historical scenes such as king’s entertainment ceremonies and receptions. 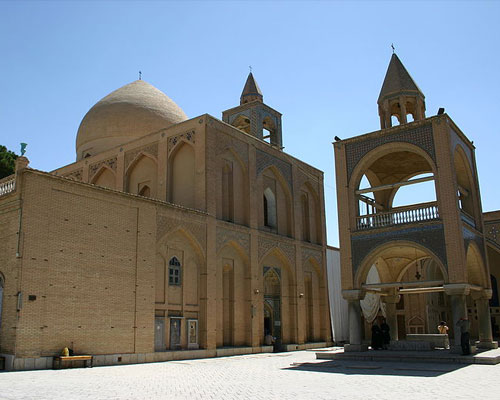 This church is located in Jolfa which is the Armenian district of Isfahan. Iranian architecture is mixed with Armenian architecture in Vank Cathedral. What make this church so different from anywhere in the world are the paintings inside the chapel. The prayer hall holds a unique collection of beautiful frescos depicting stories from the holy bible and Tora painted by Armenian artists during safavid era.

The museum inside the church contains exhibits of holy books such as the smallest scripture in the world. There is also a piece of hair with written words on it which you can look at it through a microscope. 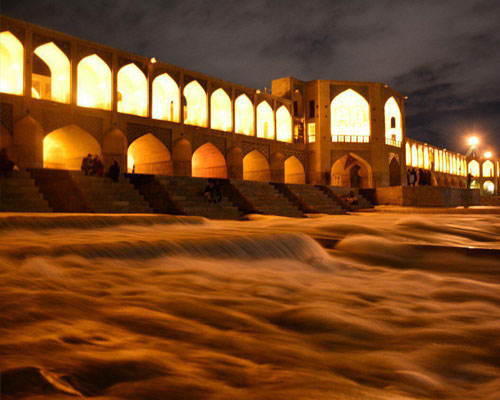 Khaju bridge, built by the order of Shah Abbas the second, is the only bridge in Iran with haft-rang tile decorations. A double decker bridge which the top story of it was used for caravans to pass over with covered corridors for pedestrians on both sides and the lower story was specifically for pedestrians only and a place for leisure and recreation. At the central part of the upper deck, there is a beautiful pavilion decorated specially for the use of the king and royal family to watch the fireworks and boat matches. Under the arches of this beautiful bridge you can listen to the locals of Isfahan singing traditional Persian songs. 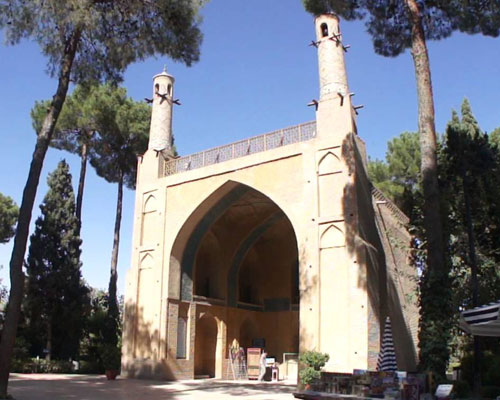 The historic monument belonging to the 14the century, known as Menar Jonban, is a shrine over the tombstone of Amu (Uncle) Abdollah. Menar Jonban is considered as one of the most popular monuments of Isfahan for its wonderful architecture. The main distinguished feature of this monument is that by shaking strongly one minaret, the other minaret starts shaking with the same frequency. Check the Menar Jonban schedule beforehand, so you would not miss it. 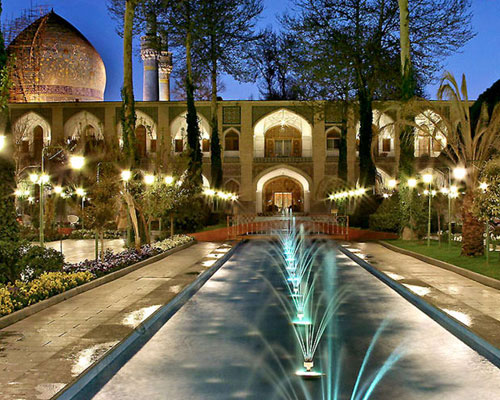 Abbasi Hotel, the last attraction to be mentioned on this list, is one of the best historic hotels in the world. Abbasi hotel, a 300-year-old building in the midst of the city of Isfahan with its historical architecture, was built in Safavid-era under the orders of Shah Sultan Hossein.

On a paved walking street named Chahar Bagh Abbasi, this hotel stands along with a Caravanserai, a Bazaar and a School as a complex named Madar-i-Shah.

How to see the top 10 attractions in Isfahan?

These tours, each, can help you visit a different collection of top 10 attractions in Isfahan